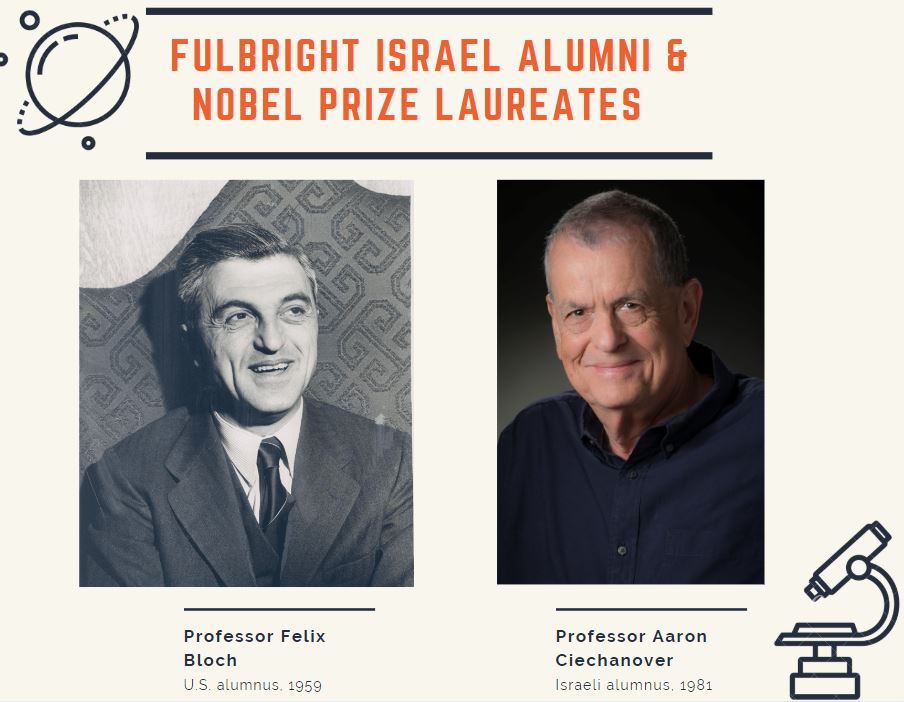 Nobel Prize Laurate, Professor Felix Bloch was a Fulbright Lecturer Fellow at The Hebrew University of Jerusalem in 1959.

A nuclear physicist, Bloch’s crowning achievement was the technique he developed for accurately observing and measuring the magnetic properties of nuclear particles, what he called “nuclear induction.” Bloch shared the Nobel Prize for the discovery of this method with American physicist Edward Purcell. Later known as nuclear magnetic resonance (NMR), it is the basis of the medical imaging technique, magnetic resonance imaging (MRI).

Bloch was a pioneer of physics in the twentieth century. He was among the great innovators to demonstrate that quantum mechanics was a credible tool for understanding many previously-unexplainable physical phenomena.  Among his successes was his quantum theory of metals and solids, which resulted in ''Bloch Waves," which describe electron behavior in a crystal, and later, "Bloch Walls” which illustrate the boundaries between magnetic domains.

In 1961, Bloch became the Max Stein Professor of Physics at Stanford University where he continued his experimental research on nuclear magnetism. He died in Switzerland in 1983.

Israeli Fulbright alumnus, Professor Aaron Ciechanover, received the Nobel Prize in Chemistry in 2004. He was a Fulbright Researcher fellow at MIT in 1981, following his Ph.D. at the Technion - Israel Institute of Technology.

A biochemist, Ciechanover, shared the Nobel Prize for the discovery of the method that cells use to degrade and recycle proteins using ubiquitin, along with Israeli biochemist Avram Hershko, and American biologist Irwin Rose. Their research showed that the regulatory protein found in most cells, ubiquitin, plays a crucial function in the context of protein deterioration: at the time for a protein to be broken down, a ubiquitin molecule attaches itself to the protein. The ubiquitin molecule serves as a key that enters a proteasome, a protein complex that divides the protein into smaller pieces.

In his Nobel Lecture, Ciechanover described the significance of the discovery. He noted that until the 1980’s, protein degradation research was neglected and the site of cellular protein breakdown and the mechanisms involved were unknown. “The discovery of the ubiquitin-proteasome system resolved this enigma. We now recognize that the ubiquitin- and proteasome-mediated degradation of intercellular proteins is involved in regulation of a broad array of cellular processes, such as cell division, regulation of transcription factors, and assurance of the cellular quality control. Not surprisingly, aberrations in the system have been implicated in the pathogenesis of many human diseases, malignancies and neurodegenerative disorders among them, which lead subsequently to an increasing effort to develop mechanism-based drugs, one is already in use (1).”

Today Ciechanover is a Distinguished University Professor and Director of the Rappaport Institute, Faculty of Medicine, both at the Technion - Israel Institute of Technology.

Felix Bloch, 1953, accessed HERE  (This photo is in the public domain.)

Background material for this article was accessed at: